Boxing fans can expect an exciting fight between seven-time world title winner, Nonito Donaire and the Jackal, Carl Frampton. The boxing match is to take place at the SSE Arena in Belfast on April 21st. The UK betting apps favourite is Carl Frampton, but Donaire will undoubtedly be a tough opponent. 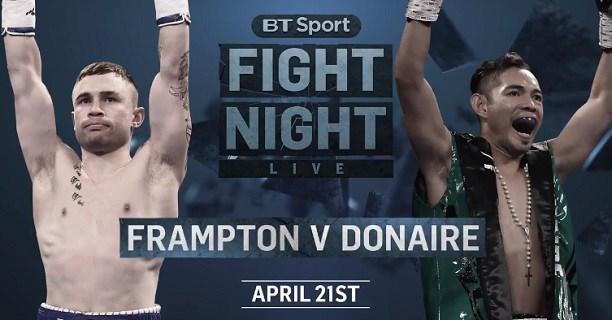 There is a long boxing career behind the 35-year-old Filipino, Donaire. Nonito has been in the ring for the past 17 years. The Filipino Flash had his debut in 2001 when he defeated Jose Lazaro with a knockout, just one minute and 46 seconds into the first round. He then fought against Rosendo Sanchez and lost.

After that, Donaire had a long winning streak. Between June 2001 and December 2012, the Filipino boxer didn’t lose a single fight. However, in 2013 Nonito lost his super bantamweight belt to Guillermo Rigondeaux. Just a year later, Donaire also lost the WBA featherweight title in a match against Nicholas Walters. In 2016, the Filipino lost yet another belt. This time it was the WBO super bantamweight title, and he lost it to Jessie Magdaleno in a unanimous-decision victory.

The last time we saw Donaire was in 2017 when he won the WBC Silver featherweight title. Donaire currently ranks as the world’s 10th best in the featherweight division. His professional record summary marks 38 wins and 4 losses.

The Belfast boxer, Carl Frampton, on the other hand, has lost only once during his 9-year-long career. Carl’s first professional fight ended with his triumph over Sandor Szinavel. Frampton was unstoppable until last year when Leo Santa Cruz beat him on points and took back the WBA world featherweight title.

The Jackal’s last opponent was Horacio Garcia. The winner of this fight was Frampton, and he now has a chance to continue his winning streak. However, that depends on how things will play out in the long-awaited clash between Frampton and Donaire. Carl Frampton and Nonito Donaire will fight for a vacant WBO interim featherweight title in less than a month. Stay tuned.