Tony Bellew Beats David Haye with TKO in Fifth Round

Tony Bellew did it again. The long-awaited rematch between Bellew and David Haye finally happened on May 5th. Last time Haye met with Bellew, he had a disadvantage as he suffered an Achilles injury in the sixth round of the bout. This time around, nothing stopped Haye from displaying his finest skills. Still, the Hayemaker left the O2 Arena defeated. 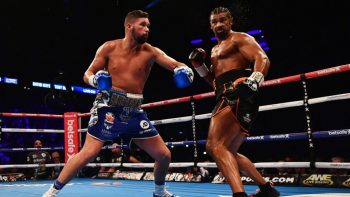 Before the fight, Bellew was confident he would win the match. As Bellew explained, he learned a lot of since he last met with Haye in the ring. Bellew decided to completely remove his focus from his weight as the main winning factor, and he’s been working on the technical aspect of boxing. Meanwhile, Haye didn’t change a thing about his approach, which is why Bellew was sure he’d win a rematch with the Hayemaker.

As it turned out, Bellew was right. The underdog of best Android betting apps knocked Haye out three times during the bout, only to put an end to the fight in the fifth round. Haye relied on his speed and timing, but those two attributes let him down this time. Bellew floored his opponent twice during the third round. The third time was final, even though Haye wasn’t ready to give up yet. The referee approached Haye in the fifth round, and put an end to the Bellew-Haye rematch.

At this point, there’s nothing left for the former two-division world champion except retirement. Haye himself said that he would retire if he loses to Bellew once again. However, after the fight, Haye mentioned nothing about his previous statement. He made a comeback, but unfortunately for Haye, it didn’t open many doors to him.

Commenting on Bellew’s triumph, Haye said, “Tony, you are a brilliant dance partner, you proved many doubters wrong and were without question the deserved winner.”

As far as Bellew’s plans go, the boxer called out Andre Ward after the match. However, Ward retired last year. We’ll see if he’ll return to the ring to fight with Bellew.